As I get older and closer to having children of my own, I find myself looking back on my child hood.  I see some of the kids that I give lessons to and I think “what was I doing at that age?”.  A lot of the kids that come into get baseball lessons have great Dads.  I also have a great Dad, but my Dad was not a baseball dad.

My Dad, also John Madden, was a football player.  No, not that football player.  He was a running back for his football team in high school.  From what I hear he was pretty good.  In fact, we used to make fun of him and call him Al Bundy because he always talked about the time he scored 4 touchdowns in one game.  Still, whenever I meet one of his old friends they call him “Juice”.  I guess that’s what they called him back when OJ was just a great running back and not what we think of him as today.

As good as my Dad was in football, he didn’t get to play in college or the pros.  He and my Mom were married young and had me soon after.  So, because of that, he had to go to work.

Just as he was new to being a Dad (I was the first child), he was new to the game of baseball.  I’m not even sure if he ever played in a real game.  So when I started playing baseball, he didn’t have much to teach me…or so he thought.  My Dad was very influential in my baseball career!  The following is what my non-baseball Dad taught me about Baseball.

I remember having this little red toy box.  I remember it not because my toys were stored there, but because that was the box I would jump over.  My dad was always in great shape and one of the things he always did was plyometrics.  I think he was doing plyometrics before they were even a thing.  I started out doing side to side jumps and front to back jumps over that little toy box.  When I got a little older (like 10 or 11), I remember he gave me his Herschel Walker’s Training Book that had a bunch of exercises that you could do in your house or back yard.  I remember doing a lot of these exercises for the next few years.  We even had a tire that I could pull with a strap that went around my waist.  We did some push ups and a lot of jumps.  I remember jumping a lot.

I really believe that having this influence early in my life taught me how to stay light on my feet and be able to move quickly.  I also remember it being fun.  It was never like a mandatory workout.  It was just working out because that’s what we did and it was fun.

As I got older and grew a little bit (a lot – I was 6’4 in the 7th grade), my dad bought me a weight set.  I remember going shopping for my first weight set.  I was excited.  I think I was excited about all this stuff because that is what my dad did.  He always worked out and was always in shape.  So, he never made me workout, but it was fun for me to because that’s what my dad did.

I started with a bench, a barbell, a curl bar, and some dumbbells.  I think I had 185 lbs total but that was way more than enough at that time in my life.  I had the weight bench in the middle of my room and would lift weights whenever I could.  He taught me the proper form and told me all he knew about weight lifting.  Again, it was nothing about baseball, but I really think this early influence with weights helped me tremendously in my baseball career and overall development.

When I got into high school the weight bench wasn’t enough.  He got me a gym membership to his gym.  I remember when he taught me how to do squats.  Within a few months I was squatting what he was squatting.  I think it was 315 lbs at the time.  I remember thinking I was a big dogg then! Remember the football game that my dad scored 4 touchdowns in?  Well, he always said that the night before that game that he dreamed he was going to score those 4 touchdowns.  He said he was able to see the team that he was playing and actually visualize the runs that he made that scored the touchdowns.  He always preached that if you can make yourself visualize before the game, it will come true.  I used to lay down before the games on my back and imagine striking out the batters and getting base hits.  A lot of the time it worked.  I continued this visualization from Little League, all the way through my professional baseball career.

My dad always told me I was the best.  Now, he didn’t make excuses if I didn’t do well in a game, but he would always highlight the bright spots, even in a bad game.  I really built up a lot of confidence this way.  I thought I was the best thing around.  I believed that I could do anything and beat anyone in the game of baseball.

I really think that to be a top level athlete, you have to truly believe that you are the best.  There are no professional baseball players who don’t believe in themselves, let’s just put it that way.  My dad did a good job of making me feel like I was the man!

One of the only times that I ever saw my dad playing on a baseball game was for a charity event at our local baseball fields.  I forget what it was for but I remember him hitting the ball and running around the bases as fast as he could.  The mascot was on second base, but by the time my dad got to third base he had caught up to the mascot.  The play was going to be close at home, so my dad ended up running over the mascot to get safe at home.

This was the first time I saw him on a field and being competitive.  But just like everything else, he showed me how to do it by example.  He joked, as did everyone else (including the mascot), after the fact, but while he was in there, he was playing hard and I was always learning by example!

Although he didn’t know much about baseball, he was always reading and learning.  He would never give me direct advice about baseball, but I remember a bunch of times when I would come home and find a magazine article or a news article about some of the best players in the game and how they do what they do.  It was either exercise routines or articles talking about mechanics, but they were always great articles.  He never made me read them.  He just put them there so I would see them.  I

did always read them though and I always learned something from them.  Although we never watched baseball a lot, I did have some role models in the game to look up to through the articles that he showed me.

How to be tall

My dad is not very tall (5’10”) and neither is my mom (5’5″) but when I turned out to be tall (6’4″) it was no surprise.  From when I was very young my dad told me stories about Michael Jordan and how he was cut from his high school basketball team because he was too short.  He told me that Michael wanted to grow so bad that he would hang upside down and think about getting taller.  I wanted the same thing so my dad went out and bought gravity boots.  We would take turns hanging upside down from our attic hatch using my barbell as the limb.  I don’t know if that is the reason that I turned out so tall, but I’m sure it didn’t hurt.  It was just another example of him teaching me that if you believe you can do something, you can!

It’s only a game

We never HAD to practice.  Instead my dad would ask me if I wanted to go play a game.  Our favorite game was “errors”.  We would throw a ball off of a wall and would have to field it without making an error.  The person with the least amount of errors would win.  We would play this for hours.  Looking back I realized that this way of practicing was great.  It helped build my competitiveness because I wanted to beat my dad, it worked on the physical aspect of fielding, and it showed me that it’s a lot more fun when you approach it like a game.  I never took the game of baseball too serious.  It was always fun for me and I think my dad had a big part in my views on baseball.  I remember some of our extra practices were just to see how far we could hit the ball or what new pitch we could invent.  It was never very serious.

You can be whatever you want to be What I am going to teach my kid about baseball…

I don’t know if my future son is going to be a baseball player.  But whatever he is or wants to be I hope that I can be as big of an influence in his life as my dad is in mine.  I know one thing, I’m going to have that little snot nose jumping over his toy box by his 4th birthday!  You can bet that!

UGoProBaseball.com is the sister blog site to YouGoProBaseball.com Hello everyone.  My name is John Madden.  This is my second (or possibly 3rd, I can’t remember) attempt at starting this blog.  You see, I have a website that I’ve been working on since 2007 called You Go Pro Baseball.  So I’m intending for this blog U… 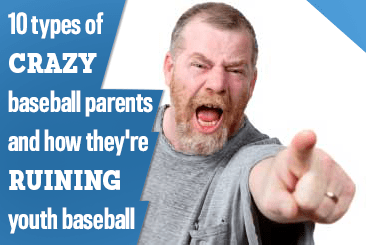 Since my playing days have come to an end, I have been coaching and instructing baseball players.  I come across players and parents from all walks of life, but in this article I wanted to share the 10 types of crazy baseball parents and how they’re ruining youth baseball. Crazy Baseball Parents #1 The my…